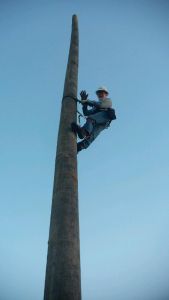 David works as a lineman with Duke Energy.

For most of his career as a lineman with Duke Energy, David Goff has climbed tall utility poles to inspect and repair high-voltage wires. It is a tough job that requires constant attention to safety and detail. Although the hours were long and the work often dangerous, Goff loved his job.

But an uncontrollable cough that quickly deteriorated to a serious case of the flu threatened to render Goff unable to work again.

Diagnosed with the H1N1 flu strain, or swine flu, Goff quickly fell into respiratory distress. Complications from the disease, known to affect the lungs, soon put Goff’s life in danger. A specialized technology called extracorporeal membrane oxygenation, or ECMO, at UF Health Shands Hospital would give Goff one of his best chances at survival.

The device is a mechanical circulatory system that temporarily takes over the function of the lungs in patients with acute respiratory failure. It can also provide cardiac support until the patient recovers or is able to receive further treatment.

Goff’s illness started with a nagging cough in December 2015. A quick visit to the doctor yielded a pneumonia diagnosis and round of antibiotics. The Goffs expected David to rebound quickly, like he always did. But a week later, Goff was coughing up blood.

Alarmed, his wife Lynn rushed him to a hospital in Dothan, Alabama from their home in Sneads, Florida. A nose swab for the flu came back negative, and the pneumonia diagnoses held. Goff was hospitalized, and his health was quickly declining. A bronchoscopy lead to the diagnosis of the H1N1 flu strain, and he fell into acute respiratory distress. His body began to swell with fluid.

Goff was intubated and placed in an induced coma. Reducing the fluid load and keeping him hydrated became a delicate balance.

“At that point, his attending physician at the Alabama hospital called us to transfer him to UF Health Shands Hospital to manage severe acute respiratory distress — and possibly place him on ECMO,” said Hassan Alnuaimat, M.D., an associate professor in the UF College of Medicine’s division of pulmonary, critical care and sleep medicine. “That day, the weather was bad so we were not able to transport him via helicopter, so he arrived via ambulance.”

“I nearly died from dehydration when they tried to stop fluids, but the extra fluid was making my lungs soupy,” Goff said.

For four days, doctors carefully monitored Goff’s condition. They hoped that medication would reduce the fluid load on his lungs, allowing him to recover on his own. But his condition continued to decline. Goff was taken to the operating room, where a surgery team led by Tiago Machuca, M.D., Ph.D., connected him to the ECMO machine. He remained on the device for 10 days, his life hanging in the balance.

For a patient like Goff, the machine is connected to one or more veins, usually near the heart. Also known as venovenous ECMO, the procedure is used to treat patients with lung complications, including acute respiratory distress syndrome.

“When Mr. Goff came to us, he was quite sick. We knew we had to act quickly,” said Machuca, an assistant professor of surgery in the UF College of Medicine’s division of thoracic and cardiovascular surgery. Goff remained sedated in the intensive care unit.

“It was touch and go for about a week,” Goff said.

Then came the turning point.

“I was having all kinds of dreams while I was asleep. What woke me up is one wild dream. I was in a room full of people in the hospital, full of people who had given up. The doctors were assisting them to die. I was in that room, I didn’t want to die,” Goff said. “When I woke up, my nurse, Paula, was there. She couldn’t understand what I was saying, so I wrote something on a piece of paper: 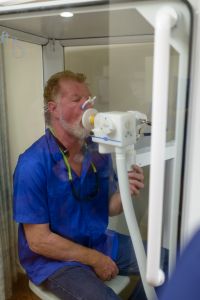 From that moment, Goff began to improve. His throat raw from a tracheotomy tube still in place, he communicated with staff by writing things down. He tracked the days by the dates on a white board in his hospital room.

“That’s how I knew I had lived another day,” he said.

After spending nearly three and half weeks at UF Health Shands Hospital, Goff was stable enough to be transferred back to the hospital in Dothan, Alabama. From there, he was discharged to a nearby rehabilitation facility.

Toward the end of February 2016, and nearly two months from the initial pneumonia diagnosis, Goff was finally home. He crept through recovery during the first few months.

“I needed to be on oxygen just to move around,” Goff said. “Even a short walk to the kitchen was too much. I couldn’t do anything that I loved to do — no projects around the house, no hunting, no fishing.”

Building a chicken coop, a project that would have taken an afternoon by himself, took a week — even with help from his sons. The local football banquet, for which Goff normally grilled steaks, appeared beyond his reach. While he was not able to cook for the attendees, the team postponed the banquet, inviting him to give the keynote address.

“I fought depression every day,” Goff said. “At that point, I still wasn’t sure if I’d ever get back to a normal life let alone back to my job.”

Goff continued to push himself toward recovery. By July 2016, six months after his initial diagnosis, he was back on the job.

For the Goffs, 2017 has been a much better year. He is grateful to return to a fully active lifestyle at home and at work. He grilled 125 T-bone steaks and made baked potatoes for the 2017 football banquet at the local high school. “And I had the best turkey season I’ve had in a long time,” he said.

Goff still has to monitor his oxygen levels, and he has learned the signs when they are getting low. “I’ve learned to sit down and rest,” Goff said. He seldom requires oxygen during the day, but he does rely on a continuous positive airway pressure, or CPAP, machine to help him breathe at night.

“I am getting back into the swing of things, even if I can’t do like I used to,” Goff said. “Dr. Alnuaimat said before the illness I was a super-athlete, and that is probably why I survived. Now, I’m a regular person.”

This summer, Goff was back to working 12- to 16-hour days, driving to job sites, climbing poles and helping crews repair high-power lines.

As he works toward retirement, Goff hopes to start his own barbecue business.

“I am thankful for the doctors and nurses who took care of me in Gainesville and Alabama. They were all so special, and I do love them,” Goff said. “Without them, I wouldn’t be here.”