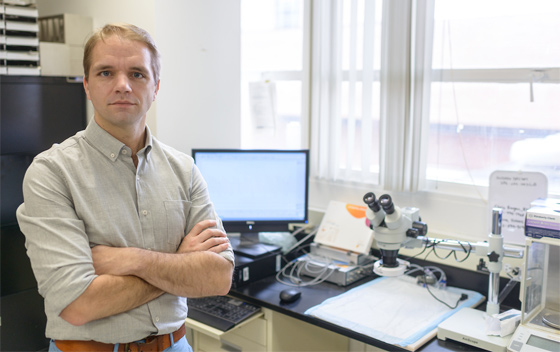 Pulmonary hypertension is a disease within a disease that has no effective treatment options. When UF Health pulmonologist Andrew J. Bryant, M.D., sees these patients, he knows medicine can offer little more than compassion to accompany a bleak prognosis.

Pulmonary hypertension, or increased blood pressure in the arteries of the lungs, coupled with idiopathic pulmonary fibrosis, or lung scarring without a known cause, are quick killers.

“These patients come in on a wheelchair and they come asking for a miracle or, at the least, a hope for treatment,” said Bryant, an assistant professor in the UF College of Medicine’s division of pulmonary, critical care & sleep medicine. “And we have to tell the patient and their family that there is absolutely nothing. We’re going to refer them to hospice by the end of the day.”

Bryant was recently named a Parker B. Francis Fellowship Program fellow and will receive $150,000 in salary support the next three years to investigate a biological agent in the body’s immune response that plays an important part in the development of pulmonary hypertension.

This might one day allow researchers to target this biomarker with drug therapies and give hope to patients where none had existed.

The prestigious and highly competitive fellowship is awarded to support the career development of junior faculty conducting research in pulmonary, critical care and sleep medicine. The program is supported by the Francis Family Foundation in Kansas City, Missouri.

Bryant is the lead author of a recent study published in the American Journal of Respiratory Cell and Molecular Biology that noted a type of white blood cell found in the bone marrow, myeloid-derived suppressor cells, or MDSCs, are elevated in those who have pulmonary hypertension with fibrosis. About half of idiopathic pulmonary fibrosis patients develop pulmonary hypertension.

The study said research data indicates MDSCs play a key role in the development of pulmonary hypertension. MDSCs introduced into the lungs of mice, for example, increase the likelihood of the disease.

MDSCs are part of the immune system’s battle against infection. They suppress other white blood cells to ensure the immune response does not run out of control.

“They limit the collateral damage to our own body,” Bryant said.

But too much of a good thing can cause more harm than the infection itself. This can be the case with some cancers. An abundance of MDSCs limits the body’s ability to fight the disease by suppressing other white blood cells attempting to kill the cancer, Bryant said.

“Obviously, if we could stop the MDSCs from coming to the lung, we could potentially stop development of the disease,” he said.

A drug might one day be developed, he said, to prevent that MDSC migration.

Pulmonary fibrosis patients who also have pulmonary hypertension “will die at a four-fold faster clip” than those with fibrosis alone, putting the disease’s mortality on par with pancreatic cancer, Bryant said.

The type of pulmonary hypertension studied by Bryant, which afflicts 1 to 2 people out of every million in the U.S., is associated with an underlying lung disease, such as chronic obstructive pulmonary disease or pulmonary fibrosis. It also includes cases of hypoxia, a shortage of oxygen in the body sometimes seen with people living at high altitudes.

Pulmonary high blood pressure can lead to heart failure, just as it can with the better-known hypertension commonly tested during medical checkups. In pulmonary hypertension, the right side of the heart must pump harder to overcome the inflammation of the pulmonary arteries.

The Parker B. Francis Fellowship Program award will allow Bryant to study the biological mechanism driving the accumulation of MDSCs and their role in generating pulmonary hypertension.

Bryant said he is honored both for the fellowship and the generous support he continues to receive from UF Health.
He recalls those difficult conversations with patients seeking a lifeline.

“It’s just so unsatisfying as a physician because with most diseases you can at least offer a glimmer of hope,” Bryant said. “You want to offer patients something.”

Bill Levesque joined the UF Health staff in May 2017 as a science writer covering the Institute on Aging and research of faculty physicians in the College of Medicine.